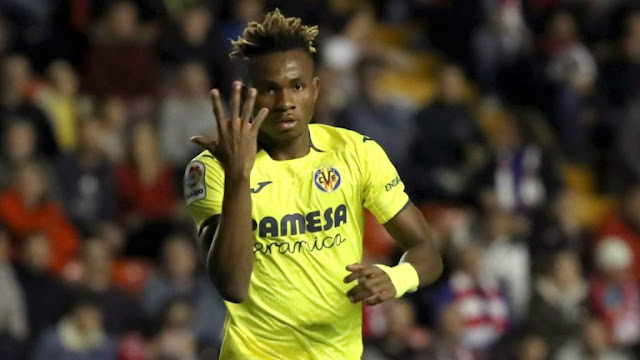 Super Eagles winger, Samuel Chukwueze, has rejoined his Spanish club Villarreal ahead of the 2019-20 season.
Chukwueze was given an extended break, after featuring in the 2019 Africa Cup of Nations in Egypt, where he scored once as Nigeria finished third.
On Monday, the Yellow Submarine confirmed his arrival for pre-season.
“He’s here! Chukwueze. He has started today his special pre-season training programme at the training ground after playing the Africa Cup of Nations with the Super Eagles. Great to have you back Samu,” read a statement on the club’s Twitter channel.
The 20-year-old scored eight goals in 38 appearances across all competitions last season, to help Javier Calleja’s men finish 14th in LaLiga.
Chukweze will be expected to play a part when Villarreal take on La Nucia in a pre-season game on Wednesday.
Tweet Pin It
League Tables
Full PL Table