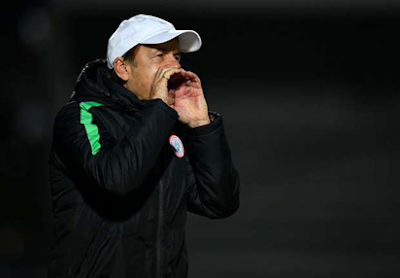 Super Eagles’ Technical Adviser Gernot Rohr has bluntly denied talking with the Democratic Republic of Congo as regards handling their senior national football team popularly known as Leopards.
He disclosed from France that he would not do so when still having an existing contract with the Super Eagles of Nigeria.

He, however, expressed happiness and humbled that some countries in Africa are showing interest in him which according to him testified to the good works he has done so far with the Super Eagles.
“I did not negotiate with anybody (DR Congo). But I am honored that so many (African football) federations are thinking of me”, Rohr said.

It was reported by Congo online news outlet that the Congolese Football Association (FECOFA) is looking at Rohr as a possible replacement for Florent Ibenge who quit as head coach of the Leopards on Wednesday, ending his five-year spell with the team.