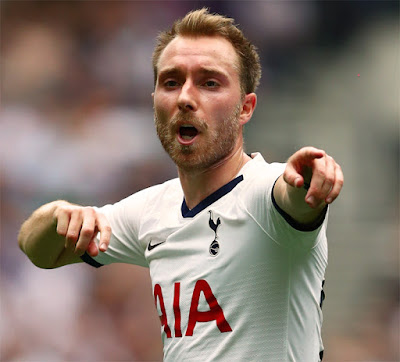 Tottenham Hotspur midfielder Christian Eriksen is only considering a departure from the Premier League for Barcelona, Real Madrid or Juventus, according to reports from EPSN.

Eriksen, 27, had been strongly linked with a move to Manchester United earlier in the 2019 summer transfer window, as reported by the Evening Standard, but a move to United did not materialise and the Dane remained with Spurs for the start of the new 2019/20 Premier League season.
Since arriving at the club from Ajax in 2013, Eriksen has been integral to Tottenham’s success and played a leading role in their run to the 2019 Champions League final.

The playmaker has scored 49 goals and registered 60 assists in 205 Premier League appearances for the Lilywhites, whilst establishing himself as one of Spurs’ main attacking assets in the Mauricio Pochettino era.

Therefore the potential departure of Eriksen from the Tottenham Hotspur Stadium would be a serious blow to Spurs’ domestic and European aspirations in the 2019/20 campaign, especially after the club’s successful window in which they acquired the services of Tanguy Ndomdele, Ryan Sessegnon and Giovani Lo Celso.

If Eriksen is to depart Pochettino’s squad for Barcelona, Real Madrid or Juventus, it would be difficult for Spurs fans to begrudge their Danish playmaker given his contribution to the club in establishing their domestic credentials as well as pushing the club into the territory of Champions League finals.

Yet with just 12 months remaining on his contract, this could be a deal that works for all concerned – Eriksen, Spurs and the next recipient of the Dane’s services – but whether Levy is willing to sanction the departure of such an important player in the Spurs set-up is a question that remains unanswered as the summer window begins to draw to a close.