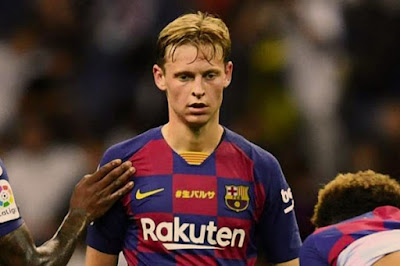 Frenkie de Jong has to adapt his game after moving from Ajax to Barcelona, according to new team-mate Sergio Busquets.

The deep-lying Dutchman has been heralded as the heir to Busquets’ throne in the heart of the Blaugrana midfield, and many suggested the transition from Ajax to Barca would be a straightforward one given the deep-seated links between the clubs.

The pair have started together in Barca’s last two games, but Ernesto Valverde’s side have endured an inconsistent start to the season.

After bouncing back from the opening-day defeat at Athletic Club with a win over Real Betis, they were held to a 2-2 draw at Osasuna in the last game before the international break.
“He must adapt to a style of football other than that of Ajax,” Busquets said. “But he will be great, both now and in the future, he can be one of the best.”

De Jong played a starring role in the Netherlands’ 4-2 win over Germany on Friday night, scoring his first goal for his country to level the scores at 1-1.
Busquets had played 90 minutes in Spain’s 2-1 comeback win over Romania the night before, a game which saw Real Madrid defender score on his 166th international appearance. A converted penalty took him to joint-tenth on his country’s all-time list of top scorers, alongside former Madrid winger Michel on 21.

With Spain looking to make it six wins from six in Euro 2020 qualifying against the Faroe Islands on Sunday night, the game could see Ramos draw level with former team-mate Iker Casillas’ record of 167 international appearances.

“It is an incredible number of matches,” Busquets said. “He is one of the best in the world, and he is lucky to have been able to play so many, to go far in many tournaments.

“He has won two European Championships and the World Cup. It is an honour to have him here as captain.”

At 31, Busquets is two years Ramos’ junior, but he was asked if the thought of retirement had yet entered his mind.

“You keep going year after year,” Busquets said. “It depends on how I feel and the confidence of the coach. I am only thinking about this season, to keep working to be better.

“Then there is the European Championship and that is what concerns me. From there, I would not know what to tell you.”