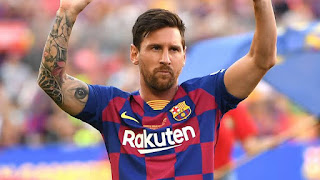 Lionel Messi is arguably the finest free-kick taker in world football, and Diego Maradona claims he must take some of the credit for the Barcelona star’s stunning record.

The 1986 World Cup winner spent time working with the five-time Ballon d’Or winner when in charge of the Argentina national team between 2008 and 2010.

Messi was already a global superstar by that point, but was considered to have areas of his game that could be improved.

Maradona set about trying to play some small part in the ongoing development of a man who will take up a standing alongside him as an all-time great when an iconic career comes to a close.

One Argentine legend says he passed on words of advice to another when it comes to the art of set-pieces, with Messi having benefited from simple training ground instructions.

“I coached the best, Messi, and nobody can tell me otherwise, because he was able to skip past up to five players – a phenomenon,” Maradona, the new boss of Gimnasia de La Plata, told reporters.

“He had an issue with free-kicks. When we finished every training session, we kept Leo behind so he could practice, and he started to hit the post.

“I didn’t teach him how to take a free-kick, then he asked me how I was able to score.

“I said, ‘you just have to hit it in the middle. They aren’t going to give me an Oscar to teach you this’.

“And he replied, ‘but I hit it in the middle and the ball goes this way or that way’ and I told him, ‘don’t worry, you’re going to make it’. Now he just can’t miss.”

Having helped to keep Messi on the path to greatness, Maradona is now taking on another challenge in his homeland.

He has returned to coaching with Gimnasia after a spell in Mexico with Dorados de Sinaloa.

The 58-year-old is confident that he can make a positive impact in a new post, but is eager to point out that he cannot work miracles and needs everybody to buy into his vision.

Maradona added: “I can’t promise anything. As I told the players, I’m not a magician.

“The welcome you gave me would be enough for me, but it’s not, I want more.

“I told the club president that I want to take all day tomorrow to confirm the staff and the schedule for next week before our game against Racing.”