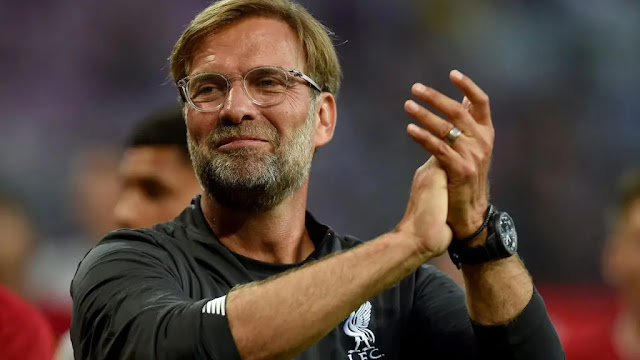 Liverpool manager, Jurgen Klopp, has dismissed Pep Guardiola’s tongue-in-cheek congratulations, after he joked last week that the Reds had already won the Premier League title.
Manchester City’s 3-2 defeat at Norwich allowed the Reds to open up a five-point gap at the top of the table, leading Guardiola to declare: “Congratulations Liverpool, you are the champions!”
His side bounced back from that defeat with a 8-0 evisceration of Watford on Saturday and Klopp doesn’t think the title is wrapped up just yet.
“It hasn’t been won already.
“Pep knows that – and that is why I understand, 100 per cent, why he made a joke about it.
“There is not team in the league who I think will go down with hardly any points. You’ve got Watford who were at the bottom with two points but, performance-wise, they could already have had five, six or seven points.
“Wolves are also struggling a bit – but will end up going back up – so we have already seen that the league is different this season.
“I think that’s why Pep responded like he did with a joke because nothing has happened so far.
“We’ve had just five games and so many things can still happen. You simply cannot think that far ahead.
“We have enough to do just thinking about the next game, then the next game and the next game,” Klopp told reporters.
Tweet Pin It
League Tables
Full PL Table