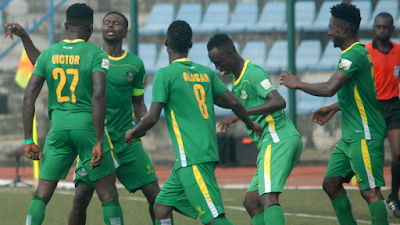 Nigeria Professional Football League (NPFL) side Kano Pillars have released a list of their registered players for the preliminary phase of the Caf Champions League.
The 22-man list made public on Wednesday had some prominent names missing, as earlier reported by SportzDom.
David Ebuka, Sunday Chinedu Adamu Hassan and Ali Malam are top on the list of high-profile names missing in the Pillars’ roster.
SportzDom gathered that late paperwork accounted for the inability of Pillars to register some of their big names for this phase of Champions League
Captain Rabiu Ali, who has been slammed with a 12-match ban by the League Management Company, will be leading the Pillars’ team which boasts with a lot of experienced legs like Gambo Muhammad, Victor Dennis, Nwagua Nyima and Nzube Aneazemba among others.
After initially staying in Kaduna to prepare for the crunch tie with Asante Kotoko, Pillars for the first time on Tuesday trained at the Sani Abacha Stadium in continuation of their preparations for Saturday’s tie.
The winners after the two-legged tie between Pillars and Kotoko are billed to face Hafia FC of Guinea or Tunisian club Etoile du Sahel in the next stage.